What makes this house contemporary? A 1970s gut rebuild that gave it a sunken living room, several atria and angled interior walls.

Sign up for our weekly home and property newsletter, featuring homes for sale, neighborhood happenings, and more.

If you’ve been following this feature for the past five-plus years, I’m sure you’ve asked yourself at some point, “I wonder how Sandy Smith lives?”

Today, I can show you. But I won’t show you how I live, though I will tell you where: in a two-room studio apartment in East Germantown with an eat-in kitchen. Trust me, you don’t want to see it.

The Society Hill Federal townhouse for sale I present today belongs not to me but to my “doppelgänger,” Sandy Smith, the publisher of the Philadelphia Business Journal.

Smith acquired this house about six years ago, right around the time Philly Mag hired me (six years ago tomorrow).  That was when the Business Journal’s parent company, American City Business Journals, brought Smith up from Washington to run its Philadelphia operation.

Ever since, we’ve confused businesspeople and real estate agents thanks partly to the fact that Business Journal e-mail newsletters go out over his name. But there’s no confusing our dwellings. Were I in his position, I’d probably buy a townhouse like this one myself.

This house, Smith says, probably began life as a feed-and-seed store with living quarters in back; an original hoist survives in a rear side wall.

“The house next door had been built for Stephen Girard,” he adds. “So these were built around the same time.” This house dates to 1815. (He also says that it had been featured in our “Property” section when it was last on the market.)

This is one of those houses whose exterior doesn’t prepare you at all for its interior. Here’s what you see upon crossing its threshold:

“The house had been gutted to the studs back in the ’70s,” Smith says. “And the former owners, especially a woman named Joanne who had a political tie with City Hall and the mayor, she wasn’t a huge fan of traditional Colonial architecture.”

And what that previous owner did was turn this 1815 townhouse into That ’70s House. Sort of. She did leave some of the Federal detailing intact, like the medallion from which the living-room chandelier hangs.

But the living room itself is a bit more contemporary, as it now sits one floor down. It’s one of only two rooms in this house, however, that do not have their original hardwood floors.

It took Smith some time to restore those floors and replace those in the living and dining room because they had all been covered with shag carpeting. Smith also removed and replaced the crown molding, upgraded the wiring, improved the climate control system and got the house’s six fireplaces back in working order.

This house, then, is now a contemporary house with some Federal touches thanks to some of the major changes made in the 1970s. Besides the sunken living room, that makeover gave it several atria and rooms with angled walls like the one that separates the kitchen from the hallway.

The eat-in kitchen has one of those atria, which rises three stories. And it has a banquette next to its window that provides some of the seating. Smith upgraded its appliances.

“The kitchen is probably smaller than most people would like,” Smith says, “but it’s perfect if you live in the city because most of what you’re going to do anyway, hopefully, is eat out.” Especially with restaurants like Positano Coast, Bistro Romano and the acclaimed Zahav as close neighbors, and even more just a little farther away. And for those occasions when you do feel like cooking, you can always find great ingredients at the Head House Farmers’ Market.

Between the kitchen and the formal dining room lies one of this house’s three outdoor spaces, a landscaped side patio.

The dining room has another period-appropriate chandelier and crown moldings with a more contemporary fireplace.

A door leads from it to the large backyard, which can also be accessed from a spiral staircase from the second floor.

That second-floor room, above the dining room, is listed as a bedroom in the property description but functions as a family room. 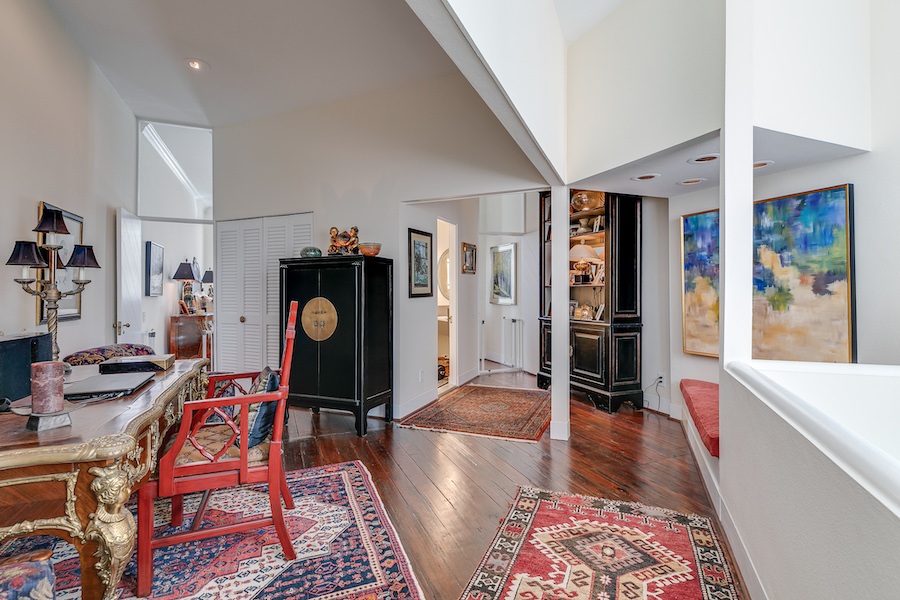 In between it and the front bedroom on the split-level second floor is a sitting area that overlooks the kitchen dining table. Next to it is the hall bath that serves the second- and third-floor rear bedrooms.

The primary bedroom is in the front on the third floor. All of the bedrooms, by the way, have fireplaces, and the third-floor rear bedroom has a vaulted ceiling.

Its en-suite bath also has a balcony that looks over the kitchen atrium.

Finally, the fourth floor contains a den with a wet bar and a large roof deck on the other side of a full-height sliding glass door. Smith says that this room could function as a bedroom because it has a closet (the family room does not).

Something else this style mixtape offers: peace and quiet. Society Hill residents value both, but the block of Second Street this Society Hill Federal townhouse for sale sits on is even quieter than most because it gets no through traffic thanks to the presence of Society Hill Towers in the next block north.

Penn’s Landing, the Moshulu, and Spruce Street Harbor Park in the summer are all a short walk away, as are Old City, South Street and Independence Hall.

This very contemporary Society Hill Federal townhouse for sale, then, is both sleek and elegant, well-appointed and convenient. It’s the kind of house I would want to live in were I Sandy Smith.