Overwhelmed North Carolina borrowers are hoping for relief. Will it happen?

Americans owe the federal government and private lenders about $1.75 trillion in student loans, a growing burden of debt that is shaping the lives and finances of a generation of collegegoers.

During the pandemic, the federal government granted forbearance for the majority of that debt, a pause President Joe Biden extended for the sixth time in April and set to expire on Aug. 31.

Now, Biden is seriously evaluating canceling some of that debt, making good on a campaign promise to address the student loan crisis.

The proposal has been a topic of heated debate among lawmakers, advocacy groups and borrowers. Some argue wiping away loans is unfair. Others say it’s a much-needed solution to growing debts that unfairly burden millions of Americans who sought their degree.

How did the issue of student debt become a political flashpoint? And why did the pause on payments last so long? Here’s a breakdown.

How many borrowers are affected?

Across the U.S., about 46 million borrowers have student debt. As of early 2022, those borrowers owe a collective $1.75 trillion, according to the Federal Reserve Bank of St. Louis.

In North Carolina, about 1.3 million borrowers have student loans and owe about $48 billion, according to the Center for Responsible Lending.

What’s the difference between federal and private student loans?

The vast majority — about 92% — of student debt in the U.S. is federal student loans, borrowed from the government at a fixed interest rate. These are low-interest, potentially subsidized loans you get by filling out the Free Application for Federal Student Aid (FAFSA).

The rest is private student debt, taken out with lenders such as banks or other financial institutions. Borrowers with private loans haven’t seen payments paused during the pandemic and won’t see their debt wiped away if the president cancels federal debt.

Why has the pause on federal student loan payments lasted so long?

Officials paused federal student loan payments in March 2020; borrowers didn’t have to make payments and interest hasn’t accrued. At the time, it was one of several measures to aid an economy halted by the COVID-19 outbreak.

But forbearance lasted long into the country’s economic recovery.

Part of that has to do with logistics, said Rochelle Sparko, director of NC policy at the Center for Responsible Lending.

Since the pause on payments began, major loan servicers such as Navient and Granite State said they’d drop federal contracts. That means the U.S. Department of Education will have to transfer millions of borrowers to new servicers, Sparko said.

Now, restarting student loan payments will be “a challenge under the best of circumstances,” she added.

Looming midterm elections may also factor into the president’s decision on the issue.

Sen. Elizabeth Warren, a Democrat from Massachusetts, argues students took on debt in pursuit of a career they believed would pay off and earn them “a ticket to the middle class.”

Instead, for a number of reasons — be it a tough job market, financial hardship or the impact of generational poverty — the loans they took out to finance their education weigh borrowers down for years and sometimes decades, leaving them “barely treading water,” Warren has said.

“We know that Black borrowers on average still owe 95% of student loan debt after 20 years of repayment,” Sparko said. “That is not typically true for white borrowers.”

For historically disadvantaged groups, she said, student debt is an additional and disproportionately large barrier to building generational wealth.

“Cancellation … serves as a large piece of the puzzle in addressing the racial wealth gap,” she said.

Critics argue forgiving federal loans is an unfair policy that would harm the economy.

Marc Goldwein, senior policy director at the Committee for a Responsible Federal Budget, believes forgiving student debt could create a surge in spending that would worsen inflation, pushing up prices that are already the highest they’ve been in decades.

Others warn of moral hazard — an economic term that can refer to creating an incentive to take unusual risks. According to that argument, forgiving debt now could lead more borrowers in the future to take on debts they can’t afford or likely won’t be able to pay back.

Goldwein also noted that canceling student debt would address a symptom rather than a cause: in the United States, a college education is costly.

Unlike other countries — where students can attend college for free or just a few thousand dollars a year — one year in-state at a public university will cost American families $22,690 on average, according to the College Board.

There are also arguments that forgiving student debt would create inflationary pressure for colleges to raise tuition, according to The Heritage Foundation, a conservative think tank. Researchers there pointed to previous studies that increasing federal student aid leads to tuition increases.

“The ideal situation is we would have college that’s affordable in the first place,” Goldwein said.

What has the president said about student loan cancellation?

On the campaign trail, Biden called for $10,000 in student debt per borrower to help address the economic fallout of the COVID-19 pandemic.

“It’s holding people up,” he said about student loans in November 2020. “They’re in real trouble. They’re having to make choices between paying their student loan and paying the rent.”

In the April announcement from the White House extending forbearance, Biden said that resuming payments this spring might have led to “economic hardship, and delinquencies and defaults” that “could threaten Americans’ financial stability.”

“I’m asking all student loan borrowers to work with the Department of Education to prepare for a return to repayment,” he said in the announcement. “Vice President (Kamala) Harris and I are focused on supporting borrowers in need.”

When will we know if debts have been canceled?

It’s hard to know if, when and how the president would cancel student debt, though the president’s aides say he will make a decision before the end of August, The New York Times reported.

The Washington Post reported Biden is considering canceling $10,000 worth of student loan balances per borrower, though his administration is concerned about the economic effects.

Some advocates of cancellation have called for more than that, saying $50,000 worth of debt per borrower is more effective at addressing the impact of student loans.

Hannah Lang covers banking and economic equity for The Charlotte Observer. She studied business journalism at the University of North Carolina at Chapel Hill and grew up in the same town as her alma mater.

The High Style of Net-Zero Homes, Which Make More Energy Than They Use

Thu Jul 14 , 2022
Internet-zero households, after built, produce no carbon dioxide by utilizing renewable energy to electric power appliances. The significant prices of setting up a internet-zero household is generally recouped by strength discounts and tax credits. Architects, developers, and buyers explained to Insider they want to lower dependency on fossil fuels. This […] 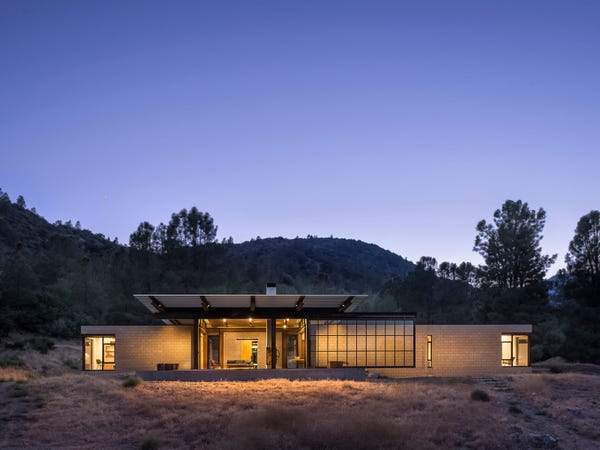