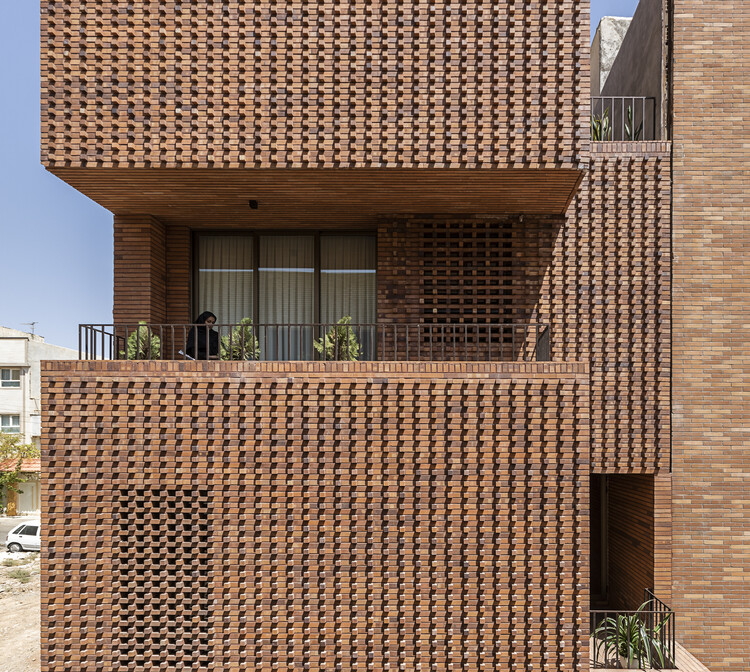 Text description provided by the architects. The Alley House design grew in response to two intrinsic aspects of Iranian culture and way of life.

On the one hand, historically conservative social structures have curated an introverted architecture preventing outsiders from even a glimpse into another’s home. But on the other hand, the rapid urbanization which started in the 1970s has resulted in hastily developed housing paradigms, with little integration of Iranian cultural preferences within their architecture. Instead, housing typologies in Iran followed generic standards for apartment buildings, with large, south-facing windows and a maximized footprint to ensure a real estate profit. As a result, what we see across all cities throughout the country are densely packed, flat buildings with large windows, covered in heavy drapes.

In response to this predicament, the design of the Alley House offers a proposal that maintains the necessary introversion of a culture-based architecture while creating connections to the outside environment which are unique to each space and the activities they house from within.

To do this, the architects created a system of frames. Rather than facing directly onto the street, these frames are instead rotated to face the sides of adjacent apartment buildings. The frames are then staggered on top of each other to provide indirect lighting via terraces which frame views or support a particular experience through their connection to the environment.

The title ‘The Alley House’ has both functional and conceptual origins. Functionally, the title was derived from a decision the architects took early in the design process to connect two parallel streets via an alleyway on the ground floor of the project. To support the aesthetic of an alley within the interior of an apartment building, urban and industrial materials such as flamed granite stone and perforated metal panels were used. The throughway allows public access during the day. Allowing public access through private property is a unique amenity as property owners often favor security and privacy over providing ease of access to neighbors.

But the title was also conceptually derived. The concept of an alley archetype is deeply rooted in Iranian culture. The alleyway, which is understood to be a narrow street flanked with fruit and walnut trees, was elevated from the ground floor to the long narrow terraces created in the upper levels from the rotated frames. The offset from adjacent walls that was needed to allow indirect light to wash the interior spaces while ensuring privacy for the inhabitants creates a narrow ‘alley’ which was then lined with potted trees and flowers to recreate the aesthetic of the alleyway archetype in traditional Persian urban design.

The building encompasses two apartments. The interior design includes void spaces between floors which are covered with grating to allow visual connections between levels while allowing the floor area to be used on this tiny 26 x 55 ft plot. The result is dynamic internal connections between spaces for the families and unique connections to the outside adjacent to each interior space.

Materials used in the project were selected to be natural, ecologically aware, and indigenous to the local environment. Qom is an arid city, with brick being the primary building material in traditional architecture. However, for decades stone has replaced locally-sourced brick in Qom’s architecture, as developers and buyers alike view stone facades to be more luxurious and expensive. The architects’ priority to use locally sourced and environmentally conscious materials led them to explore brick-laying patterns for a façade that is both iconic and unique, and which separates itself from the construct of being old-school or generically vernacular.

In this project, the architects strived to gesture towards the roots of Iranian culture and architecture while using traditional and local construction materials in a novel and aesthetically pleasing manner. The red brick façade is both understated and iconic in the urban environment it rests in, demanding attention while concealing the vivacity within.