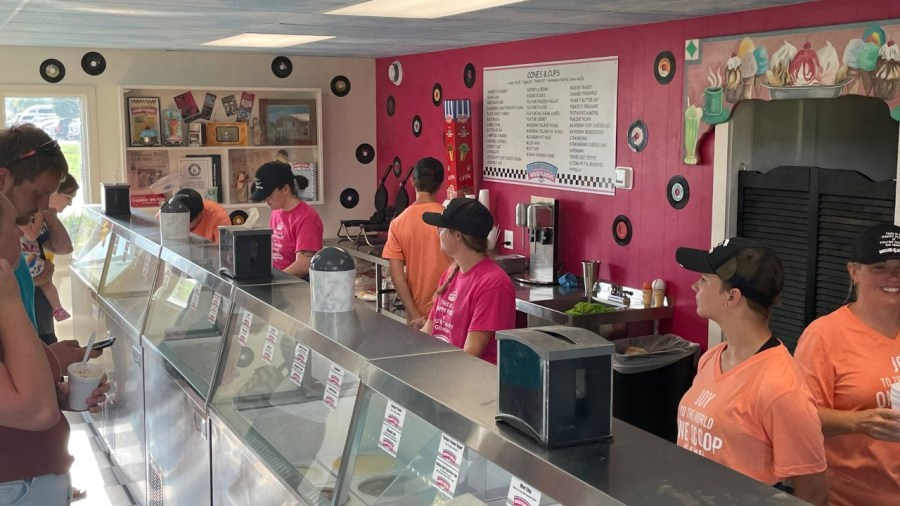 ZEELAND, Mich. (WOOD) — More than a decade in the making, The Parlor by House of Flavors is now open in Zeeland.

The owners behind Ludington’s famous House of Flavors have been planning for years on opening a location farther south and landed on their hometown. This time, it’s only focused on ice cream, with owner Barry Neal saying a full restaurant would require more staff than he thinks he could hire.

The Parlor by House of Flavors held its grand opening July 11, serving up 40 homemade flavors of hard ice cream. Neal said the feedback has been extremely positive outside of one customer who came looking for some soft serve.

“We’re not that. We sell the products that we make in Ludington,” Neal told News 8 this week. “(Customers seem) really happy. I’ve had a lot of people who vacation and live in the Ludington area that have drove down to Zeeland to see what we are doing. I’ve also heard from people who moved from Ludington to the Holland area that are also glad that we’re down here.”

While the shop is open, there is still work to be done. Neal says the supply chain has caused some problems and delayed some equipment, but the final piece of The Parlor’s menu should debut next week: ice cream floats.

Neal estimates about 65% of the outdoor work is done. The Parlor has some picnic tables and landscaped paths off the bike trails that connect to nearby Huizenga Park. More picnic tables are coming, as well as more artwork for the exterior of the building.

The Parlor by House of Flavors is next to JQ99 near the I-196 Business Loop. Neal, who used to work for the radio station, says the two are working together on a shared space called “Joy Park,” which will include a stage for musicians to play. It all builds into Neal’s focus for the business.

“I think the world is hard enough. We hope that we share a little light and a little love in what we do. It might be disguised as an ice cream cone, and we’re OK with that.” Neal said.

There are plans to open a third House of Flavors location in West Michigan, but it’s still in the early planning stages. Neal says its important to get the Zeeland parlor up and running first.

“We are talking about another location. We have had a lot of communities at this point reach out to us which was very nice and kind. But we’ll see. We’re one and a half weeks into a program that appears to have been received really well,” Neal said.

The Parlor by House of Flavors is open every day from noon to 9:30 p.m. You can learn more about the parlor, including its flavor of the day, on its Facebook page.