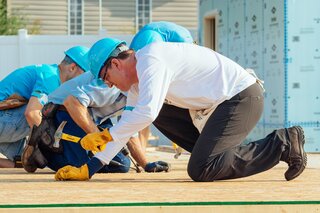 It is no slight to Jonathan Reckford’s intellect or his seriousness to observe that, in the movie of his life, he would definitely be played by character actor Stephen Tobolowsky. The comedy standby (best known as Groundhog Day’s Ned Ryerson) shares with the longtime CEO of Habitat for Humanity the same soft southern accent, the same disarming smile, and most importantly the same undeniable sincerity, a quality that has doubtless served Reckford well in his 17 years as head of the world’s largest non-profit low-cost home builder.

Since its founding in 1976, Habitat for Humanity has helped provide housing to some 46 million people across the globe, building thousands of homes using a mostly volunteer workforce organized on a community- and faith-based model. The appeal of the group’s approach, amplified through high-profile media events (some of them featuring a certain peanut-loving ex-president), has made Habitat not only one of the most productive forces in the below-market housing sphere but also, perhaps, its most recognizable. And yet, as its leader of nearly two decades is quick to point out, the organization’s popularity has also generated a host of popular misconceptions about what it does and how. During a recent visit to Detroit for the World Economic Forum’s Urban Transformation Summit, Reckford took a break from his busy conference schedule to give Dwell—as his filmic alter ego might have put it—one doooozy of a myth-busting interview.

How did you end up here? Not here at the Summit of course—at Habitat, as one of the longest-serving non-profit CEOs in the country.

I had a very random career, but I’d always wanted to do something in the poverty-alleviation space. After graduating from college, I talked my way into a job as a financial analyst at Goldman Sachs—which I then suffered mightily for: I was not cut out to be a banker. After that, I went to work for the 1988 Olympics in Seoul, South Korea, coaching the Korean national rowing team. (I’d been a competitive rower in school). When I got back to the U.S., I applied to business schools, thinking that I could acquire skills in the private sector and then make a transition into a more mission-oriented role; I earned my MBA at Stanford, and, over the years worked at companies including Marriott, Disney, Circuit City and Musicland, which was bought out by Best Buy. But after a while I felt like I had worked in the private sector way longer than I ever planned. So I just left. I went abroad and worked in India, led a large church in Minneapolis for a couple years. And then Habitat came calling. I definitely felt like I could be a good fit there especially, in terms of faith and culture, but I never thought they would actually choose me. I thought Jimmy Carter ran it.

Let’s talk about that. The presidential connection obviously looms rather large.

Yes, so much so that people think Carter founded us! It’s not the case, but the myth has helped make us a household name. A man named Millard Fuller actually started the organization. His inspiration came from the work of Clarence Jordan, who started an interracial farm in Georgia in the early 40s. Fuller was a brilliant fundraiser: you sat next to him on a plane and you’d go right home and start doing Habitat projects. In 1984, President Carter was out for a jog in New York City and saw a group of students working on a Habitat project City; he said, “We have to get involved with this,” and shortly after that he and Mrs. Carter joined in. All of the volunteers, including the President, were sleeping on the floor of a local basement each night. That caught the press’s attention, and that was the beginning of it all. The Carters did a Habitat project that bore their name every year until the Covid-19 pandemic happened.

The last one, in October 2019, was almost the worst day of my life: I got a call from someone who said the President had fallen and wasn’t going to make it to the build in Nashville. Then they called back and said he was coming anyway. Once again, the press showed up, and the result was that famous clip just about everybody has seen by now, with the President working away, his head all bandaged up. He and Mrs. Carter just have such a deep level of engagement.

Got it: engaged, yes; running the show, no. What other things does the public maybe have wrong about Habitat?

Well, most people also think we give away houses. But it’s a lot more complicated than that. From the very beginning, the traditional model of Habitat was to help families to buy the houses we build on terms they could afford. Our homeowners typically pay no down payment aside from their sweat equity with the first mortgage, which is set at no more than 30 percent of their income. Then on top of that we’d provide a “soft” loan, with no payment due until and unless the house is sold. After I joined up, we looked at the model, and tried to actually figure how long it would take using that strategy to fulfill our putative goal—to eliminate poverty through housing. The answer came back that it would take over 1000 years.

So we changed the question: What would it take to meaningfully reduce housing costs and scarcity in every community we serve? We had this huge volunteer army, loads of expertise, and a social-change mission; what we wanted to do was tie those together in a way that would let us build more than ever before. So we started to do a lot more incremental construction, rather than building whole houses, and do a lot more through financing. Most of the financing isn’t direct A to B; we made a big bet on microfinancing, in particular. We created a whole microfinance fund for building, and then loaned that capital to banks around the world, allowing us to launch more projects, more rebuilding efforts. And we’ve grown tremendously as a result—since 2005 we’ve gone from serving 125,000 individuals annually to more than 7.1 million last year.

So it’s not just the ubiquitous image of families and friends with hammers and nails, putting up pitched-roof Cape Cods.

Not at all. We do a lot of multi-family. I also don’t think people realize that a huge chunk of our work is global. An overwhelming majority of our projects are in the Global South; all the same principles still apply there, providing what the market really needs, not just building but upgrading housing, putting in a new roof or adding another room. We’re doing a big initiative right now in Latin America and the Caribbean, where the problem is not a quantitative housing deficit but a qualitative one. We’re working to get kids off the dirt floors by replacing them with concrete surfaces that are healthier and safer.

In the affordability fight, the nonprofit sector is obviously important. But what role does Habitat have as an advocate for broader economic and political change?

There used to be a resistance in the organization concerning anything to do with the government, but our growth has pushed us to approach advocacy differently. We now believe there has to be a multitiered approach. In the U.S., a lot of the change we need is local, connected with land use and zoning. We have the advantage of hundreds of Habitat affiliates located in communities across the country, so we can be a voice on those problems. But we also need to see an expanded funding role from the federal government, and to foster that Habitat is also doing advocacy at the national level. At present we’re focused on our primary legislative agenda item, the Neighborhood Homes Improvement Act, which would provide loads of new tax credits for upgrading America’s aging housing stock both for livability and sustainability. The good news is that, when I used to talk to members of Congress, they’d always say, “We don’t hear about housing.” Now of course middle-class families can’t afford homes, so it’s become this pressing political issue. To solve it, we’re looking to influence the whole policy ecosystem. We’re eager to show up in places people don’t expect us.

This piece has been updated to more accurately describe Habitat’s mortgage process.

Previously in this series:

How Adaptive Reuse Can Help Solve the Affordability Crisis

A Glamorous Update For An Exemplary Ernest Fooks Mid-Century Home