Located in a particularly natural setting in the city of Mar del Plata, the “Casa sobre el Arroyo” (House on the River) – known as the “Casa del Puente” (The Bridge House) – is considered a paradigmatic component of 20th-century architecture and an obligatory reference of the Modern Movement in Argentina and Latin America.

The house designed by the Argentinean architect Amancio Williams, commissioned by his father, the musician Alberto Williams, is constructed evidence of the capacity to establish a link between the modern rationality of human beings with nature and its topography. 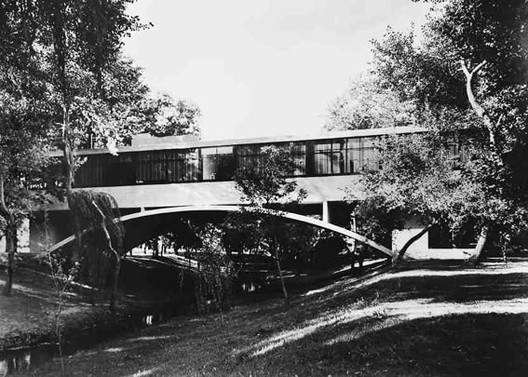 Designed and built between 1943 and 1946, with the collaboration of architect Delfina Gálvez de Williams, the house is situated on a plot of land consisting of two blocks in a natural area characterized by the “Las Chacras” stream that runs through it.

The structure is designed in three dimensions, synthesised in pure geometric forms that work integrally. It is made up of three basic elements: a curved surface, the horizontal components of the main volume and the roof-terrace plane.

The curved arch that links both banks of the stream works in parallel with the main floor slab by means of the vertical partitions and the beams that materialise the railing that surrounds the entire volume, creating a structure that allows all the interior spaces to relate to the natural context outside through the windows that are positioned along the entire horizontal perimeter of the house.

The reinforced concrete used for the structure was hammered on the outside and chemically treated to give it a significant appearance and leave it outdoors without coating.

Access to the two main staircases contained in the curve of the arch is via the materialised sector of the ground floor which constitutes the two support points of the bridge. With regard to the steps of the staircases, the rise decreases as one ascends, following the curvature of the arch.

The interior of the house shows a linear typology, a series of rooms open to a gallery that refers to the traditional porteño ‘chorizo house’, whose division is materialised with cedar plywood panels with walnut edgebanding, and which establishes a distinctive division between public and private spaces.

Despite the acts of vandalism it suffered after its abandonment, including arson and graffiti, the house remains standing and was restored to be fitted out as a museum. Today, the house has several declarations of cultural and historical heritage value, making it an important event in Amancio WiIlliams’ approach to modern architecture.